My Journey toward the Meaning of Human Existence

What came back (not surprisingly) was a link to The Meaning of Human Existence, a 2014 book by Edward O. Wilson, a Pulitzer-Prize-winning author, biologist, and naturalist. As Wilson summed it up:

Human existence may be simpler than we thought. There is no predestination, no unfathomed mystery of life. Demons and gods do not vie for our allegiance. Instead, we are self-made, independent, alone, and fragile, a biological species adapted to live in a biological world.

Wow — that blew my mind. Not only have we humans adapted well enough to survive in our biological world (in which it’s estimated that 150 to 200 species of plants, insects, birds, and mammals become extinct every day), we have thrived like no other species. “Exalted we are,” as Wilson put it, “risen to be the mind of the biosphere without a doubt, our spirits uniquely capable of awe and ever more breathtaking leaps of imagination.” 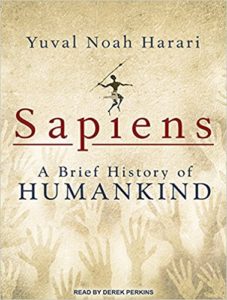 Harari traces our cultural evolution back 70,000 years to the beginning of what he calls the “Cognitive Revolution,” when humans (most likely by virtue of an accidental genetic mutation) started developing new ways of thinking and communicating. Our power of expansive thought and language enabled us to imagine things that we had never seen, touched, or smelled — not just individually but collectively.

This Cognitive Revolution led humans to evolve culturally at lightning speed compared to the rate at which we evolve biologically. For example, while our forebear Homo erectus used stone tools in roughly the same way for two million years, we Homo sapiens use our unique cognitive skills to transform our social structures, interpersonal relations, and economic activities in the matter of a decade or two without any biological changes.

At the same time, our rapid ascent to the top of the food chain created (and has steadily widened) a gap between us and the ecosystem. As Harari said:

Ever since the Cognitive Revolution, Sapiens have…been living in a dual reality. On the one hand, the objective reality of rivers, trees and lions; and on the other hand, the imagined reality of gods, nations and corporations. As time went by, the imagined reality became ever more powerful, so that today the very survival of rivers, trees and lions depends on the grace of imagined entities such as the United States and Google.

This interplay between biological and cultural evolution was entirely new to me, and it explained a lot about why we are who, what, where, and how we are today. These two books provided a history lesson that was much broader and more pragmatic than anything I’d learned in school, where history classes were mostly about memorizing and regurgitating the dates of key battles in either American or World History.

I wanted to share my newfound insights with others who were searching (knowingly or not) for some context to how they live their lives, but I recognized that reading books like Wilson’s and Hariri’s is not for everyone. (While Sapiens is a bestseller, my informal survey has shown that many who bought the book have not gotten around to reading it yet, and may never.)

Gamifying the search for meaning in our human existence.

Thus, The Game of Humanity is a first effort to “gamify” a difficult but very worthwhile topic for broader consumption. More than just a fun romp through history, the game explores our Human Nature in relation to each other and our environment while illuminating the Human Condition of our here and now.

I hope you’ll give it a try — it’s free, and you can play it alone or with others in an hour or two on any computer or mobile devices at www.gameofhumanity.com. 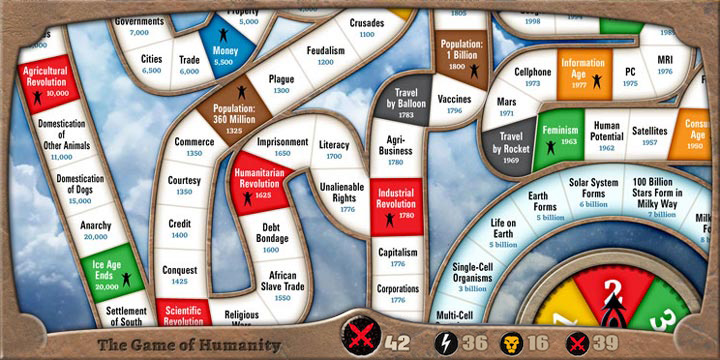