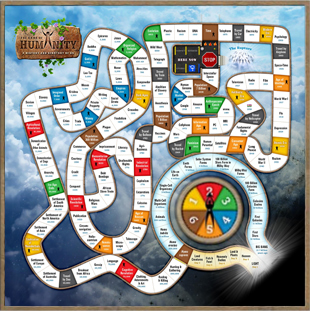 The Game of Humanity traces the path of Mankind from the Beginning of Time to the here and now. Players travel this path leading tribes of Peeps, gaining and losing tribe members along the twists and turns of human history in cooperation and competition with other tribes.

The objective is to reach the present day with a diverse and large (but not too large) tribe of Peeps, thus doing your part to ensure Humanity’s continued march through Time.

The game is intended for two to four Homo sapiens ages 12 to 200,000. A single player can choose to play against one to three Artificial Intelligences (AI). 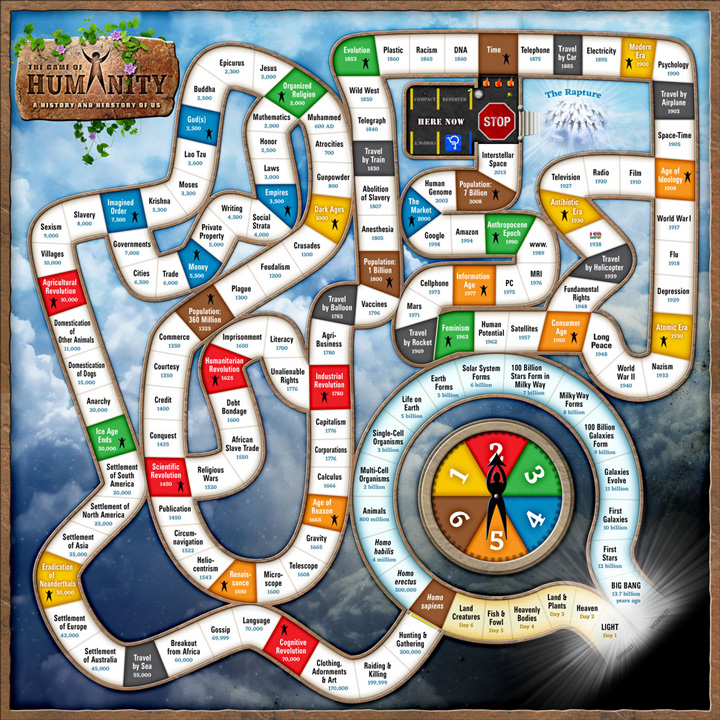 Like the path through human history, The Game of Humanity starts at the Beginning of Time — either a moment before the Big Bang some 13.7 billion years ago, or just before God created the Heavens and the Earth according to the Book of Genesis.

It continues through the emergence of Homo sapiens several hundred thousand years ago to the present day, when humans rule the Earth — for better or worse.

Most of the steps along the path mark significant developments in human history in the areas of science, industry, culture, exploration, transportation, communication — and violence.

Other spaces (those with brighter colors) represent eras, ages, revolutions, and other major phases in human history. Landing on these spaces triggers “Human Nature Challenges” between players as described later in this Guide.

Starting at the Beginning of Time, players choose a story of how the Universe was created by predicting the number they’ll spin on their first turn.

Of course, there were no humans at the Beginning of Time, so each player begins the game as simply an inchoate idea of what it will be like eventually to represent a human.

Players take on a solid form when they reach the point along the path where Homo sapiens emerged several hundred thousand years ago.

A player landing on a brightly colored space faces a Human Nature Challenge, usually involving an exchange of Peeps with one or more other Tribes.

Each such challenge draws on players’ notions of generosity, selfishness, gratitude, guile, etc. — any of which may change as the game progresses and history with other Tribes accrues.

If a Tribe lands on a space occupied by another Tribe, each of them must decide whether to “aid” or “raid” the other.

When players reach the STOP sign near the end of the path, they predict the number they’ll spin on their last turn.

The game is designed for all players to share one input device — a smartphone, tablet, laptop, etc. If you have AppleTV, Chromecast, or the like, you can mirror the screen to a TV so everyone can see.

You can also use Live Board to display just the game board to a second computer or a web-capable TV. With Live Board, all players see Tribes moving around the board but interact using the shared input device.

To activate Live Board from the second computer’s or TV’s web browser:

As noted earlier, the object of the game is to accrue and maintain a large and diverse tribe of Peeps for the good of our species. To that end, players may find the following information helpful:

If your tribe travels past an event that you are curious to know more about, you can double-click the space to view the content.

If you’re lucky enough to get a Get Out of Hell Free or Two Peeps Per Pop card, you’ll see a hand icon in the bottom of the frame. It will wave at you when it is available for use. Click it to minimize your loss or maximize your gain of Peeps.

Tribe icons and Peep totals appear on the bottom part of the game frame. Click any tribe icon to view a complete Peepulation scoreboard. 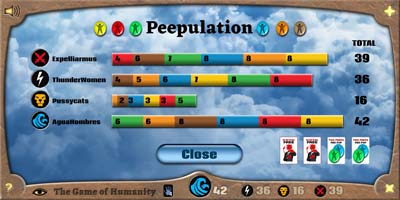